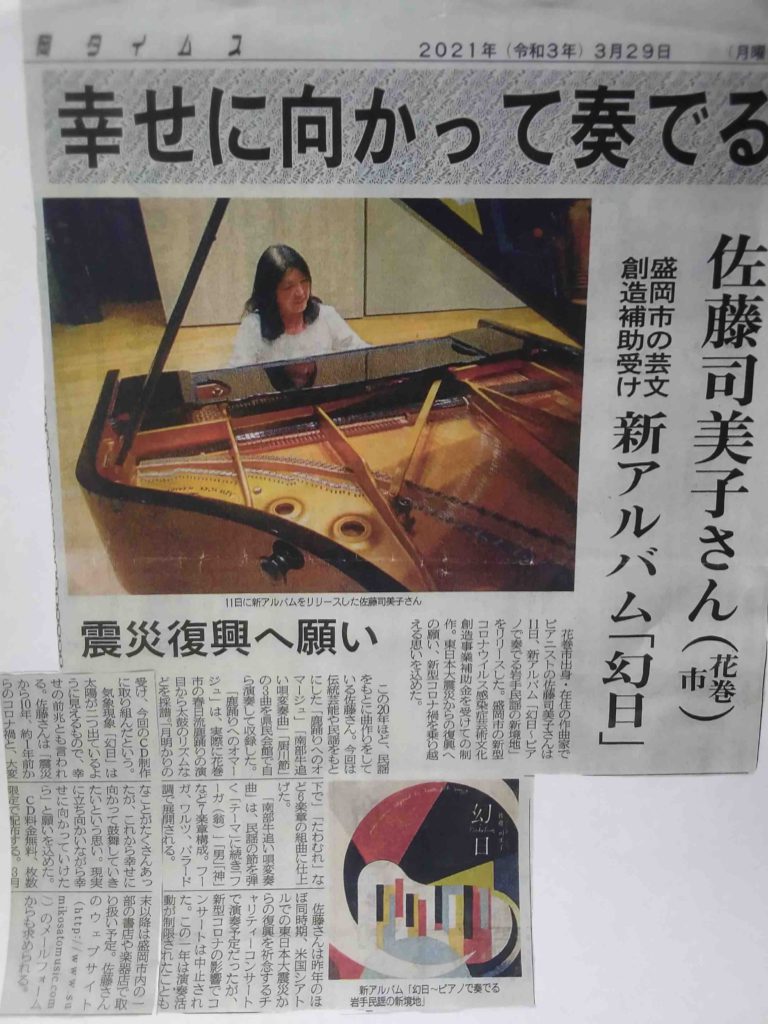 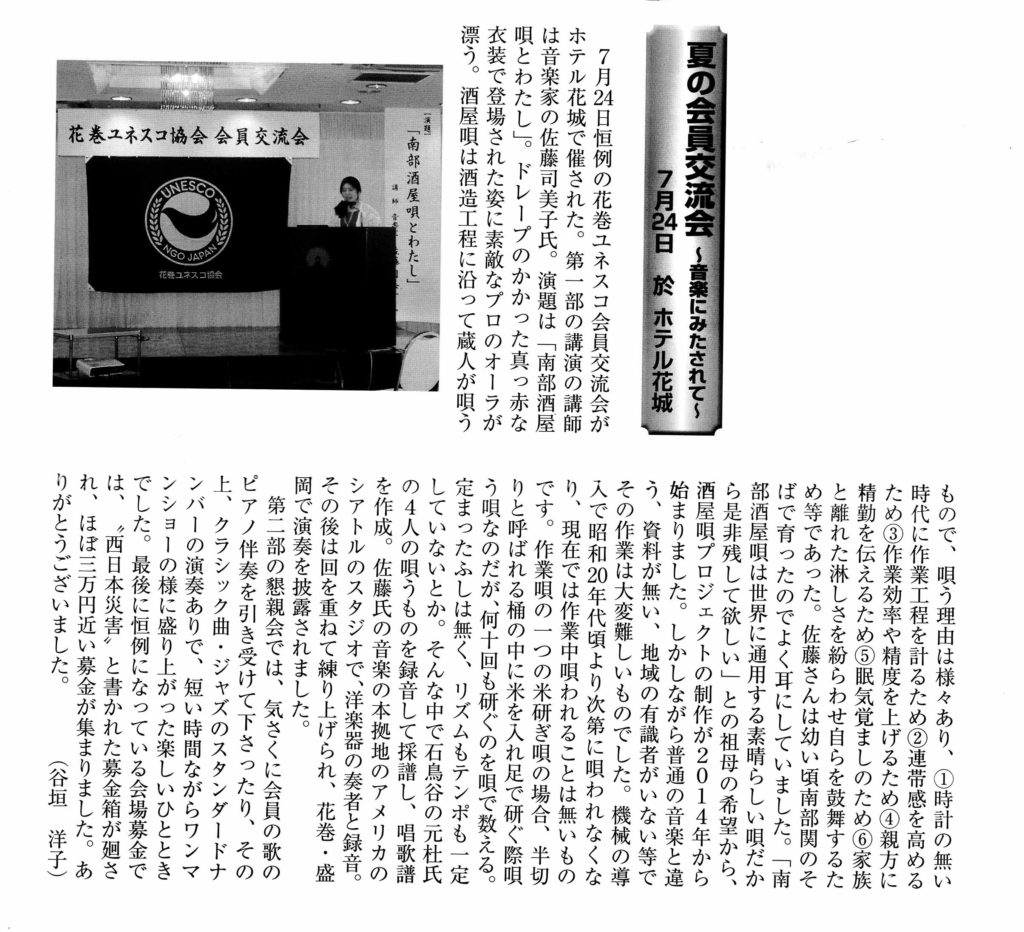 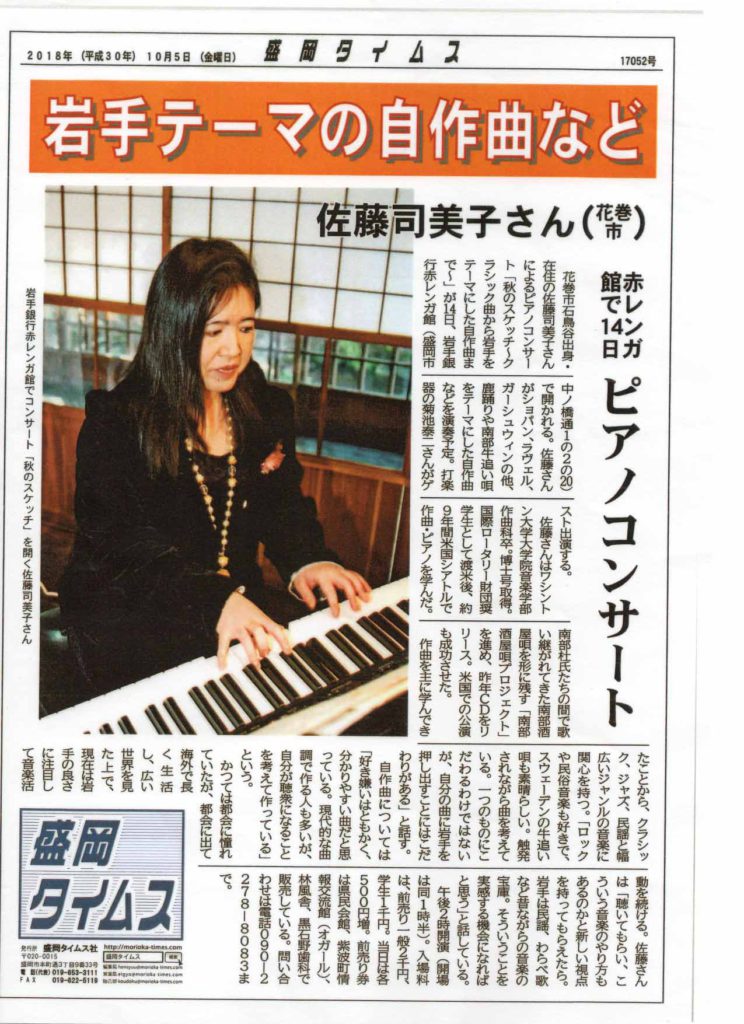 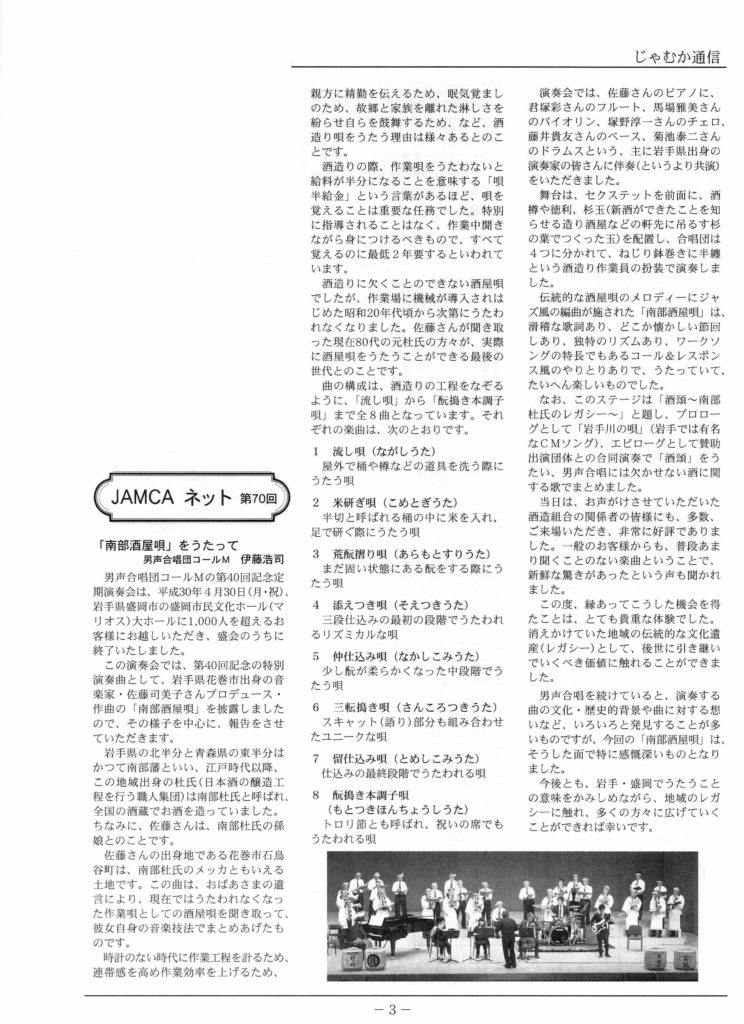 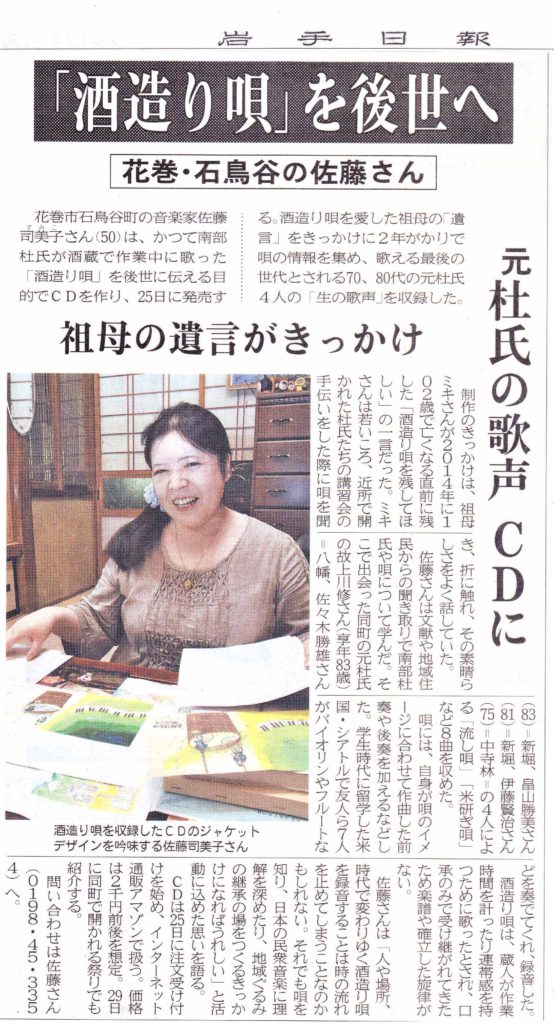 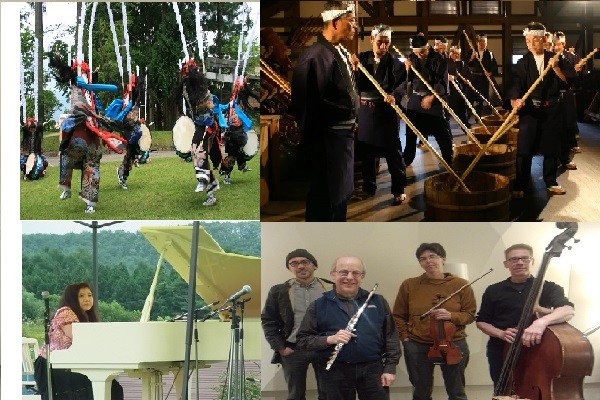 Japanese-born pianist and composer Sumiko Sato says she’s loved music her entire life.
“My mother says [that] as a baby I stopped crying when she hit a note on piano,” Sato said.
For Sato’s latest project, however, she looked a generation before her own existence for inspiration.
Originally from Iwate, Japan, Sato credits her grandmother with a great deal of musical inspiration.
Before the older woman passed away in 2013, at age 102, she told her granddaughter about the old-fashioned sake-brewing songs popular long ago.
Those songs, which arose from seasonal sake-brewers as they worked, were popular for centuries.
The rise of modern day automated sake factories are threatening their existence.
Sato will pay tribute to the brewing songs of old with an evening of music called “Sakaya Uta,” presented as part of the Wayward Music Series, on the evening of Jan. 21, 8 p.m., at the Chapel Performance Space, Good Shepherd Center.
Sato will perform with her ensemble including Paul Taub on flute; Tari Nelson-Zagar, on violin; Kevin Krentz, on cello; Dennis Staskowski, on contrabass; and percussionist Paul Kikuchi.
The pianist, whose work combines elements of jazz, classical, rock, pop and avant garde, started in this case with recordings made in 2015 by “four Sake brewer masters who are the last generation able to sing [them].” She then selected eight of the songs, and structured her own interpretations using more modern harmonies, fixed forms and strict tempos.
“The original music includes microtones and irregular rhythms, which I have found challenging to work with, in my composition,” she explained.
The eight songs, in their new forms, cover a variety of sake-making enterprises, from washing the rice to mashing the brew, and beyond. Also on the bill will be a documentary film showing old-fashioned sake-brewing techniques from the Showa period in Japan; to be shown, at least in part, while the music plays.
An additional piano selection for the program, “Homage to Deer Dance,” was?commissioned and premiered for a concert celebrating the?120th Anniversary of the birth of poet and author Kenji Miyazawa on Sept. 16, 2016.
“Shishi Odori” or “Deer Dance” is a?representative local performing art of Iwate ― a ritual designed designed to promote peace and drive away evil spirits. The piece was written in the summer of 2016, after having read Miyazawa’s story,?”The Origin of the Deer Dance.”
Sato arrived in Seattle in 1988, studying music at the University of Washington on a Rotary scholarship. She studied composition and improvisation with trombonist Stuart Dempster, clarinetist Bill Smith, and others. After finishing her doctorate in music at UW in 1996, she’s divided her time between the Pacific Northwest and Japan.
Her future plans include a recording of the sake-brewing songs, due for release in the summer of this year. The songs, she concluded, “had rarely been sung outside the breweries and?are now on the verge of extinction. I wanted to?dig them up and shed light on the beauty of the songs, using the contemporary language.”
– See more at: http://citylivingseattle.com/Content/Default/Homepage-Article-Rotator/Article/Pianist-Sumiko-Sato-pays-tribute-to-the-music-of-sake-brewers/-3/292/91769#sthash.2NyPi1YD.dpuf

Things to Do Jan 13, 2017
The 21 Best Concerts in Seattle This Week: Jan 16-22, 2017
The Intelligence, A Dolly Parton Birthday Tribute, Corridor, And More Music Critics’ Picks
by Stranger Things To Do Staff
Sumiko Sato: Sakaya Uta

Sumiko Sato is a Japanese pianist, longtime local resident, and PhD from the UW. She is premiering a series of works based on ancient sake-brewing songs, arranged for a slightly unconventional sextet: Sato on piano, flautist Paul Taub, violinist Tari Nelson-Zagar, cellist Kevin Krentz, contrabassist Dennis Staskowski, and percussionist Paul Kikuchi. You also get an informative film explaining how the sake-brewing songs worked, how you had to catch on to them fast, and how the songs are becoming extinct thanks to brewing automation. I don’t drink anymore, but hey, viva sake songs! She’s also recording this elaborate work and should have it out later this year. Drop by and be the first one on your block to belly up! ANDREW HAMLIN 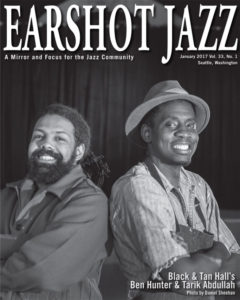 Composer and performer Sumiko Sato captures the heritage sounds and cultural practices of her native area in the far northern prefecture of Iwate on the island of Honshu, Japan.
Her new compositions focusing on the Sakaya Uta (sake makers’ songs) and the ShiShi Odori (deer-hunting dance) will be presented at 8pm, Saturday, January 21, at the Chapel Performance Space in Wallingford.
The concert, part of Nonsequitur’s Wayward Music Series, includes Sato on piano and Seattle musicians Paul Kikuchi on percussion, Kevin Krentz on cello, Tari Nelson-Zagar on violin, Dennis Staskowski on contrabass, and Paul Taub on flute.
Sato, who now lives in Iwate Prefecture, spent nine years in Seattle pursuing her music education and completed her Doctorate in Composition at the University of Washington in 1996, citing her mentors as Ken Benshoof and Stuart Dempster. She received a residency award in 2015 from Jack Straw Productions to complete and record this work.
“My work on this started from the last words of my grandmother who loved the work songs and feared their extinction,” explains Sato. “She passed away in 2013 at the age of 102.”
She includes eight sake workers’ songs in her piece, and will also present videos of both the sake brewers and the ShiShi Odori to accompany the performance.
Iwate Prefecture is a mecca for fine sake, Sato asserts. The Sakaya Uta, sake brewers’ traditional songs, are well known in Japan and have been performed and recorded in, and outside, Japan. They stem from the centuries-old practice of farmers leaving home to work in the sake breweries for several months during the winter. The regular beat and songs sung in unison aided in the consistency of line movements in the work brigade.
“The original music is an oral tradition and includes microtones and irregular rhythms,” she says, “which I have found challenging to work with in my composition.”
The name ShiShi Odori literally translates as Lion Dance, but in the ancient shamanistic practices of Northern Japan, it referred to Deer Hunting Dance. According to musician Paul Kikuchi, who visited Iwate Prefecture, also his family’s native area, hundreds of local residents perform in the annual Deer Dance Festival in authentic costumes with tall antlers, dancing and drumming in the streets.
Sato composed the ShiShi Odori this past autumn in tribute to the renowned Iwate Prefecture poet and author Kenji Miyazawa (1896-1933), whose famous story illuminated the origins of the deer dance.
“Sumiko’s work is important in that she is integrating cultural preservation and documentation into her compositional process,” says Kikuchi. “These Sakaya Uta singers are increasingly scarce in modern Japan, and the documentation of the music is of great importance to Japanese cultural heritage.”
– Mayumi Tsutakawa
Visit waywardmusic.org for more information 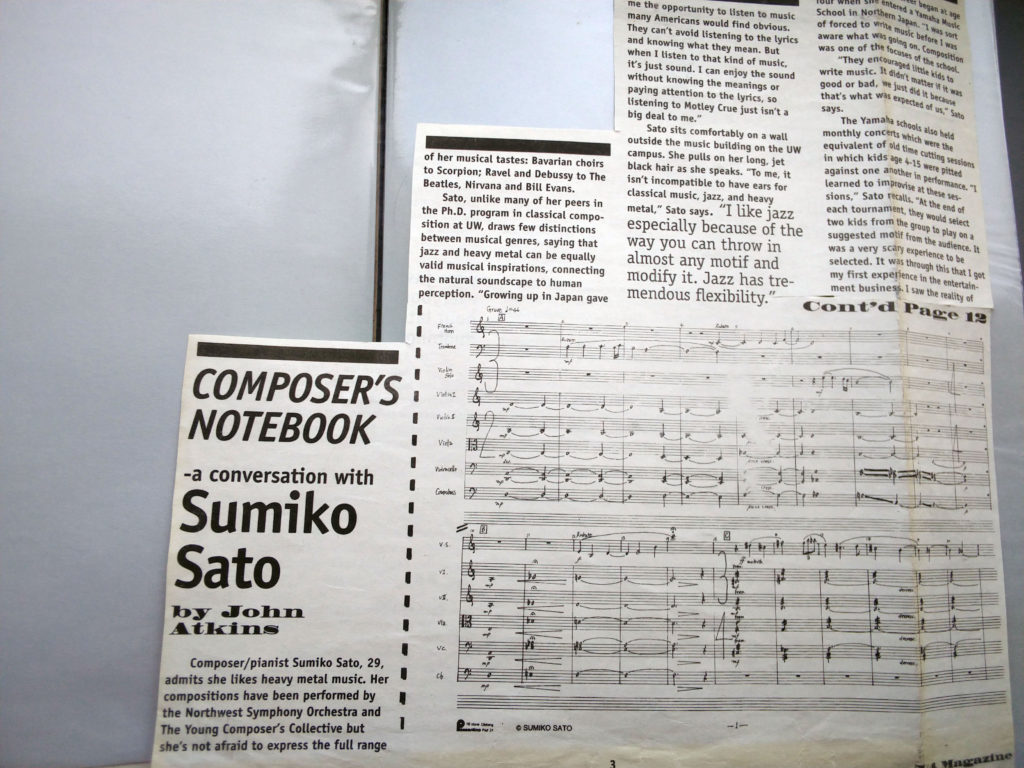 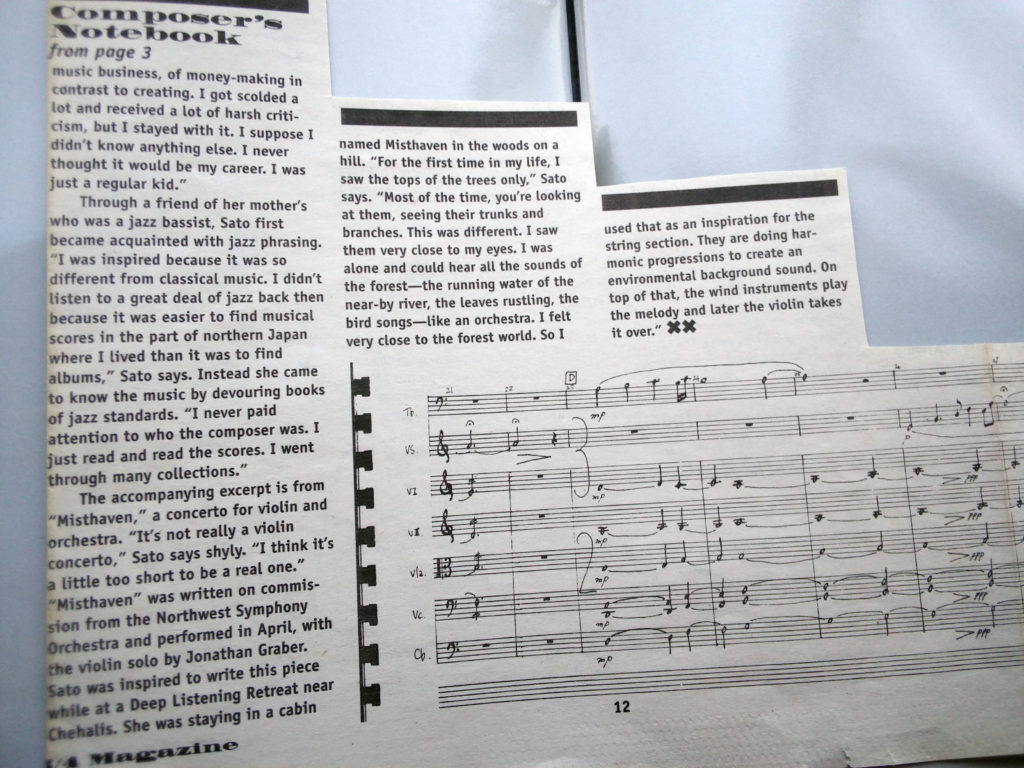